Get a FREE Estimate 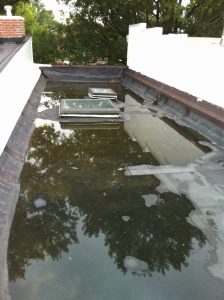 This is an EPDM (rubber) roof; it was installed over an existing built up (tar and gravel) roof; due to a number of factors it consistently held about 4″ of water on its surface. Although the name can be deceiving, a flat roof needs slope; not a lot, just enough to encourage the water to drain off to a gutter or roof drain within 24-36 hours after a rain. This house used to hold about 2″ of water all year round; if the owner wanted to he could have started a brine shrimp farm. 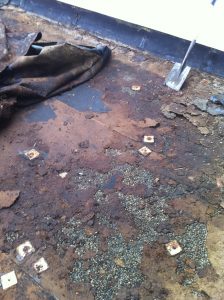 After the EPDM was peeled back it became obvious that the roof has been leaking for a very long time. The brown insulation board the previous roofer installed over the tar and gravel roof has basically dissolved. Now only rusted screws remain, holding fast to a charge that has since washed away beneath their once tightly drawn heads; decades spent diligently doing a job that had been doomed to fail. (I don’t think anyone reads these posts; prove me wrong- send a text to 571-830-zero six three four and I’ll send you a gift card)

When new roofs are laid on top of old roofs this happens more times than not; old flashings, lumpy surfaces and less than ideal substrates make it difficult to achieve good drainage and solid details. In fourteen years I have never done a recover; every roof we replace has the old roof removed first. 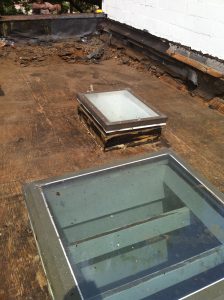 All of the EPDM and the last of the tar and gravel are being removed from the roof. Once all the old roof comes off we check for rotted decking and loose boards. 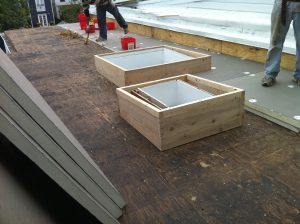 The existing skylights were mounted on flat curbs; all roof components need slope. Because the old curbs were perfectly flat the glass skylight lenses leaked. I built new curbs with a 15 degree slope, now water and debris will wash off.

You can also see the first run of tapered insulation being installed; it may be hard to tell but the insulation is thicker on the right side of the picture than it is on the left. Tapered Polyisocyanurate insulation board is basically 4’x4′ modules that are sloped in one direction, we install these in various sequences to add slope to a flat roof where there is none. Installing tapered insulation is far less expensive than adding new framing or moving rafters and achieves the exact same results; it also adds some pretty good r-value to the roof assembly. 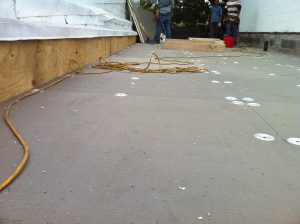 With the insulation installed we now have a perfect surface to install our new roof; the roof now rises from .5″ at the gutter to almost 9″ at the front wall. There will be absolutely no ponding water on this roof or on the skylights. 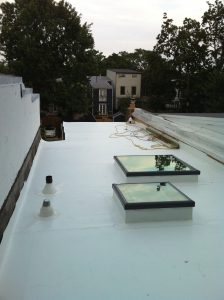 This is TPO; its a thermoplastic roofing membrane that comes in a few colors but white is by far the most popular. TPO requires no glue or sealants, the seams and flashings are welded with a hot air welder; once properly welded they require no further attention–ever. The bright white surface will keep the upper floors of the house a lot cooler than the black EPDM roof that was in place before. We also replaced the skylights with new energy efficient lenses, these are lo-e and have UV blocking properties that let sunlight in but block out the solar wavelength that brings heat.

This picture was taken at the end of the first day; although not 100% complete there is no danger of this roof leaking if it rained over night (which it did). I was happy to see in the morning that the roof had no water on it and we were able to go right back to work. 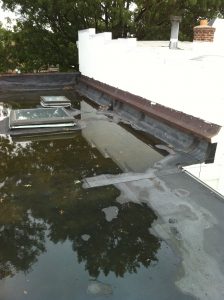 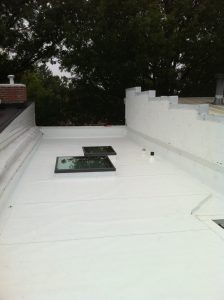 This roof will last much longer than its predecessor; proper layout, flashing details and planning can give a roof a chance to live up to its potential.

If you have a problem with ponding water on your roof, give us a call. 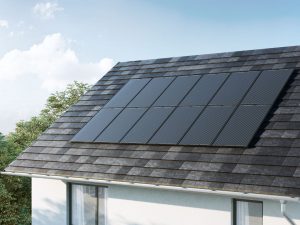 What to Expect When Going Solar: Residential 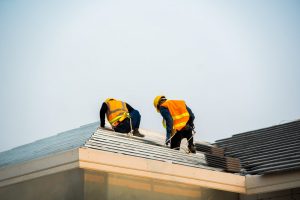 How Does a Roof Inspection Prevent Major Damage? 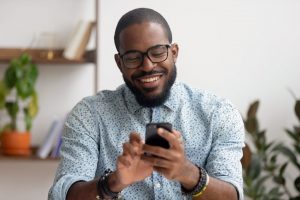 What to Consider When Choosing a Roofing System 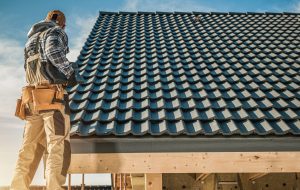 What’s the Difference Between Slate Roofs and Tile Roofs? 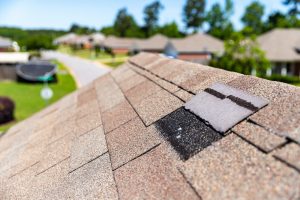 Dealing With Storm Damage When it Happens… Who Can You Call? 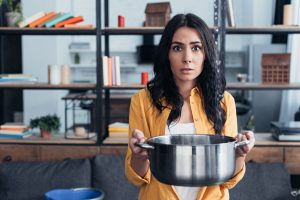 Stains on Your Ceiling? It’s Time to Get Your Roof Inspected Today!

Lyons Contracting has over 25 years of experience serving the roofing needs to the residents of the Alexandria, Virginia area.
Facebook-f Linkedin-in Instagram Houzz